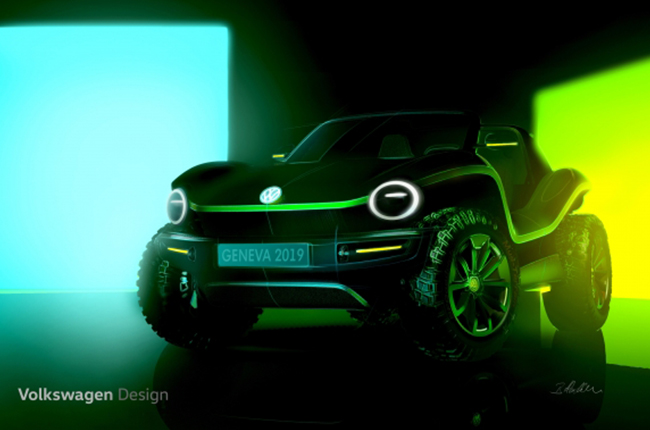 For decades, the Beetle’s chassis has made so much room for some creative custom solutions, from the Beetle convertible and other special body types produced by the brand. With the Beetle sending its farewell through its final edition last year, German automotive brand Volkswagen decided to reincarnate the Dune Buggy, one of its iconic models as formerly based on the Beetle’s chassis, albeit, in full electric form. The electric Dune Buggy will have its world debut at the 89th International Geneva Motor Show from March 7 to 17, 2019. The electric Duna Buggy’s design shifts back into time, specifically reflecting the golden 1960s of California, borrowing some design cues which resemble some of the popular American dune buggies. Its overall presentation brings that futuristic vibes with a stash of classic VW touches, all topped up with a Green Lantern-ish color combination paint.

Looking back, the Beetle’s chassis has allowed VW to design the traditional Dune Buggy with no fixed roof or conventional door structure, plus large wheels, off-road tires, and open side sills that radiate ruggedness. In order to stay true to its original form, the concept vehicle itself sits on the brand’s MEB platform or formally known as modular electric drive matrix, which notably proves to be just as flexible as its previously acquired chassis.

“A buggy is more than a car. It is vibrancy and energy on four wheels. These attributes are embodied by the new e-buggy, which demonstrates how a modern, non-retro interpretation of a classic can look and, more than anything else, the emotional bond that electric mobility can create.”
Klaus Bischoff
Head Designer at Volkswagen

The modern yet classically presented e-Buggy concept is under the brand’s strategic plan of electrifying its entire lineup. This is Volkswagen’s innovative response as to the environmental concerns being faced today and the electrifying revolution that the brand will continue to pursue in the near future.