Crossovers have been on the rise lately as many new offerings have been hitting the market. They have grown in popularity due to their car-like ride comfort and SUV-like ground clearance. These vehicles are especially suited to our country due to our unpredictable weather and uneven roads.

Diesel engines have also become prominent in the country. These power plants deliver high torque and relatively high horsepower, all while being efficient at the same time. Put a crossover and a diesel engine together, and you have a recipe for a hit.

Here's our list of 10 diesel-fed crossovers you can buy in the Philippines. First on the list is the SsangYong Tivoli diesel Premium and Sport. The crossover got a refresh in November of 2019. The refresh gave it a redesigned front and rear, as well as a new interior. At the center of the vehicle comes a new 8-inch infotainment system, as well as a redesigned climate control system.

While the initial release of the Tivoli only came in with a 1.6L turbo gasoline engine, the newest addition comes with a diesel fed 1.6L mill. The engine produces 134 hp and 324 Nm of torque. While its horsepower rating might seem low, its torque figure is more than enough to get the vehicle going at speeds. The SsangYong Korando was also launched in November of 2019. Like its Tivoli stablemate, it possesses the same engine but the way it delivers power is smoother and more defined. Similar to that of its crossover stablemate it also gets the same 8-inch touchscreen infotainment system. What differentiates it over its facelifted counterpart is its dimensions. It no longer has a round appearance. Instead, the Korando opts for a slimmer and muscular approach.

In terms of space, the Korando is 245mm longer, 75mm wider, and 75mm taller than the Tivoli. It also features Apple CarPlay and Android Auto capabilities making smartphone mirroring much easier. The older of the diesel fed models from the Korean SUV specialist available locally, the Tivoli XLV, offers an even longer platform than the Korando. While not as powerful as the other two, producing only 115 hp and 300 Nm of torque, it does offer more space and an all-wheel-drive variant.

When compared to its non-XLV counterpart, the Tivoli XLV is 45mm longer, 3mm wider, and 15mm taller. The increased size helps give the vehicle more interior space. Interior wise, it's similar to that of what you will find in the Tivoli. Head-, leg-, and elbow-room are still abundant in the vehicle making it easy for taller passengers to sit comfortably. Where the real benefits can be found is in the rear with a much bigger cargo area coming in at 574L. Unlike the other two SsangYong crossovers, the XLV gets a 7-inch touchscreen infotainment system but still retains the Apple CarPlay and Android Auto smartphone mirroring capabilities. The Mazda CX-5 has a predominantly gasoline-powered lineup but there is a diesel variant available. The Japanese crossover strays away from the macho looks of all the other crossovers on the market and opts for sleeker curves instead. Like the gasoline-driven lineup, the SkyActiv-D variant gets the same features as the gasoline fed Sport variant. Powering the Japanese crossover is a 2.2-liter turbo diesel engine that produces 175 hp and 420 Nm of torque. At the center of the interior of the vehicle is a 7-inch Mazda connect. Another Korean option to consider is the Kia Sportage. It has one of the most powerful engines in the segment producing 183 hp and 400 Nm of torque, but where the Korean crossover shines is in its exterior features. In the range-topping GT trim, the vehicle with a copious amount of lighting. The LED lighting package doesn’t only make the crossover look good but it also makes driving easier when it gets dark.

Moving onto the interior, it has an easy to use layout. This allows for easy familiarization when it comes to the controls. The Sportage even comes with many storage options for small items. Space is also good in the interior as it can easily seat averaged sized Filipinos. The second row can be reclined and can seat three people. Trunk space is where the crossover shines coming in at 491L, making it one of the largest for capacity for its class. Representing another crossover option from Kia is the Sorento. Powering the behemoth of a crossover is a 2.2-liter turbo diesel engine that produces 197 hp and 441 Nm of torque, easily making it one of the most powerful in its class. It also has the option of an all-wheel-drive model giving you more grip when you need it.

The Sorento offers seating for seven but with more space. The interior comes in leather and features a 7-inch infotainment system. One feature to note of in this Korean crossover is that in its highest trim, it comes with a panoramic sunroof. A good feature to have if you’re a fan of a brighter cabin. The CR-V already has an established name in the segment but as a gasoline 5-seater crossover. This time around, however, Honda has decided to add two more seats at the back and diesel power plant. The 1.6-liter turbo diesel engine from the Japanese automaker may not be as powerful as its competition, coming in at 120 hp and 300 Nm of torque, it does have one advantage – the crossover’s all-wheel-drive system and 9-speed automatic transmission. This lets the vehicle’s engine always be in or around its powerband delivering power when needed.

For the year 2020, the CR-V got a slight refresh with added features such as a panoramic sunroof, and wireless charging along with a Honda Sensing package being made available on the mid-range S variant. The Hyundai Santa Fe offers the practicality of having seven seats, increased ground clearance, and diesel engine. All of these fit into the criteria that most Filipino buyers will want and need in a crossover. The Korean crossover comes in a large form factor and is equipped with a full kit of LED lights. Another noteworthy feature that comes with the LED kit is the projector headlights that come with Dynamic Bending. An excellent feature to have when navigating through corners at night.

The interior has a generous offering of soft-touch plastics, plus at the very center is a 7-inch display. It also features seating for seven with leather being the material of choice for the seats. The vehicle also comes standard with a 360-degree camera for its top of the line variant.

Powering the vehicle is a 2.2-liter turbo diesel engine producing 197 hp and 441 Nm of torque. If those numbers look familiar, it is because it shares the same engine with the Kia Sorento. The engine can only be had with an 8-speed automatic transmission. 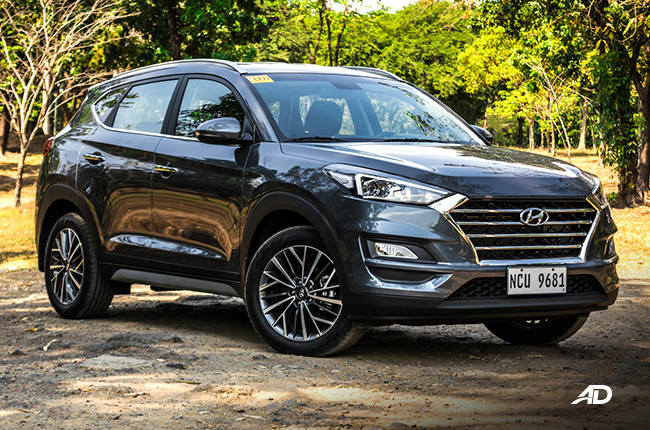 The Hyundai Tucson, like the CX-5, comes predominantly in a 5-seater configuration and with a gasoline engine. However, the diesel variant of the Korean crossover comes similarly kitted out to its top of the line gasoline counterpart. It features Hyundai’s own Fluidic Sculpture 2.0 design language and wider grille compared to that of the previous model.

On the interior of the vehicle is where things get interesting. It comes mainly in a black theme with leather being the material of choice for the variant. At the center of it all is the floating infotainment system which comes in a 7-inch form factor. The infotainment system also supports Android Auto and Apple CarPlay. Powering the Tucson is a 2.0-liter turbo diesel engine that makes 183 hp and 402 Nm of torque – more than enough to get the Korean up to speeds easily. The most expensive crossover on the list is the Hyundai Palisade. It features dimensions on par if not better than its SUV counterparts. The exterior features the same Fluidic Sculpture 2.0 design language seen on the Tucson and Santa Fe but with a two-tier design for the headlights closer to that of the Kona. At the front of the vehicle is a massive grille flanked on either side by daytime running lights as well as the main LED projector headlights.

The Palisade features a simple but classy interior without too many buttons cluttering the dashboard. At the center is a 10.25-inch touchscreen infotainment system that supports Apple CarPlay and Android Auto. Leather is the chosen material for the seats and seating for seven is standard for the large crossover.

Powering the behemoth of a vehicle is a 2.2-liter engine that makes 200hp and 441 Nm of torque. The only transmission available for the diesel mill is an 8-speed automatic transmission.