The Honda Accord is finally here and updated for the entire Philippines to see. The 10th-generation midsize sedan is radically different from the model that it replaces. With a design that is sharper and more clean-cut, the vehicle exemplifies elegance through simplicity and modern touches.

Let’s put the Accord and its predecessor in a face-off, to see what differences and advancements are present in the newest edition of the midsize executive from Honda Cars Philippines. The Honda Accord gets Acura-like styling, which features a modern design paired with straightforward lines. The new design appears simpler compared to its former iteration. The front is less bulky and more trim while still remaining distinct. In the front, you have a similar array of LED headlights and foglights illuminating the road ahead.

The side profile of the 2020 Accord, like the front, is simplified and given a very straight forward shape. It’s not overly designed, and one could say that it has a minimalist approach overall. You also get a new set of 18-inch two-tone wheels on this new model. 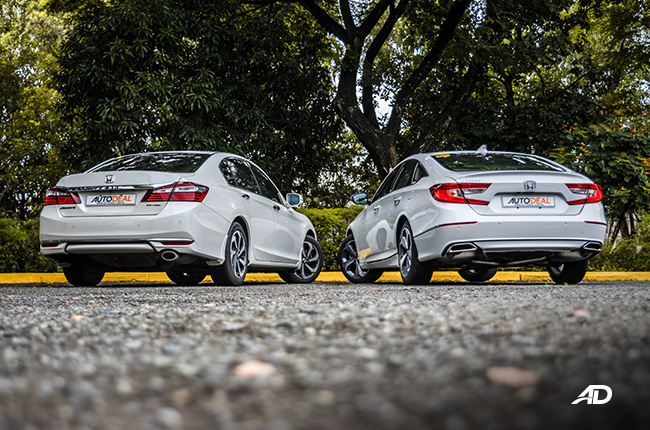 The rear is home to a set of redesigned taillights. Now with the C-shaped LEDs that most Honda vehicles are being seen with nowadays. The new is visually interesting since it is a departure from the plain-looking LED lights of the previous generation. You also get exhaust finishers at the bottom end of the rear bumper.

In a nutshell, the Honda trimmed down the excess bulk that the previous generation had. Cutting down the extra volume in the panels allowed Honda to produce a sleeker sedan. The interior is much like the exterior from old to new, it’s trimmed down and unladen with distractions. The glossy wood inlays are now matte and features different wood graining. The chubby steering wheel found in the old model is now slimmed down significantly. The intelligent multi-information display has been relocated to the gauge cluster, which also gets a refresh for the 2020 model year. In the center, a single eight-inch touch screen advanced display system is now the lone screen in the middle of the dashboard, making for an uncluttered infotainment experience.

The climate controls are also revamped for the new model. Honda has given the Accord three knobs instead of buttons that can adjust the temperature for the left and right side of the cabin, while the middle dial controls the fan speed.

For the seats, you get a different seat design for this generation. Still retained are the motorized units for the driver and front passenger. Stepping into the rear, there are two notable omissions that the new Accord doesn’t have. The old model has controls for the rear passengers to either control the front passenger seat or control the infotainment system’s output, source, and volume. The all-new Honda Accord still contains the same amount of connectivity options that the previous generation has in its head unit. You get Apple CarPlay and Android Auto, but this time audio is output through eight speakers instead of the six that the old model had. The head unit also drops the use of touch-sensitive buttons in favor of tactile units and knobs to control the volume. The main headlining feature of the Honda Accord is the addition of the Honda Sensing package. This is a suite of hardware and software features that allow the car to act semi-autonomously. The package includes a collision mitigation braking system, forward collision warning, adaptive cruise control, lane keep assist, road departure mitigation, lane departure warning, and low speed follow. The old model has cruise control, which was great at the time. The new Honda Accord also comes with a plethora of added safety features. The safety package that can be found in the old model has been augmented through the addition of the Honda Sensing package. Another addition that the old model doesn’t have is the driver attention monitor, which keeps the driver from falling asleep behind the wheel through the use of rest reminders.

Other than these additions, the new Accord shares the same number of airbags that the old one has. Both models feature a driver and front passenger airbag as well as a set of side and curtain airbags for the entire cabin. Lifted straight from the Honda Civic RS and uprated, the L15B7 turbocharged motor has 1.5L of displacement and 187 hp with 260 Nm of torque. This is up from the 173 hp and 226 Nm of torque that the 2.4L naturally aspirated engine produced. You can expect punchy performance form the small displacement 1.5L engine. Better performance can be expected since both torque and horsepower figures are up by a considerable amount.

One addition that makes a world of difference when it comes to fuel economy and drivability, is the CVT. The old box was an automatic with five gears in total. The CVT should bring about better fuel economy while retaining some elements of a traditional gearbox via the locking ratios that can be set via the paddle shifters.