The 2020 Toyota Corolla Altis is finally here, and it has one ace up its sleeve to combat the rest of the turbocharged or compact cars in the market. It does not have a turbo nor does it have premium styling, but what sets it apart can make it a worthy contender for the best-selling compact sedan in the Philippines.

There have been numerous upgrades that happened, and while there is one headlining feature for the top-of-the-line variant. There are several notable updates over the previous generation that should warrant your attention. Let’s go over most of them. The old Corolla Altis wasn’t the best looking, nor was it the worst. It had a lot of curves and edges that made it a handsome-looking sedan. Here we have a classic case of evolution since Toyota opted to take some of the better styling cues and augment them on the newer model. If you’re looking for a night and day difference, there is not too much different here. The dimensions are slightly bigger. Toyota opted to make this update 10mm longer, 5mm wider, 30mm shorter, on a wheelbase that is similar to the previous generation. Coming from the old Corolla Altis, you’ll find that the roofline is slightly more trim and less bubbly as the former model.

Looks-wise, we can’t deny that Toyota has done the Corolla Altis a good deed by getting more angular and slightly boxier when it comes to this generation’s motif. Swooping curves are now swooping edges, and they all do well to follow the design language of Toyota. In some angles, the back reminds us a bit of the RAV4, which could be a good or a bad thing. You also get updated bi-LED headlamps for the top model.

Toyota has gone with its new TNGA platform, which creates a better overall experience for the driver. In line with the updated interior, this platform allows for a lower seating position which results in a more engaging drive. While the dimensions are close to the old model, one cannot deny that Toyota took a good step forward with regards to design.

For Hybrid models, there are a few nudges that say that “I’m a hybrid” like the blue accents found in the headlights or the blue and black Toyota badging. Less subtle is the badge down the side and rear that says “Hybrid,” which should be a giveaway – clearly. 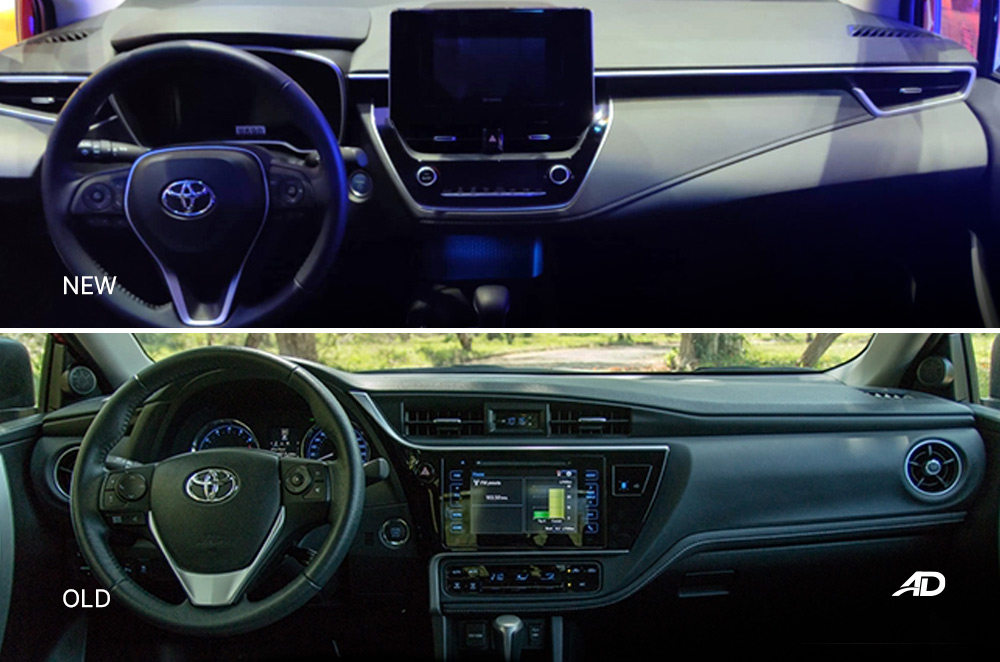 There is a subtle change that makes the Corolla Altis’ new interior feel more engaging to drive. In the past, the dashboard was pretty top-heavy. It gave the impression that the Altis had a short wall that you had to peer over while driving. Now, the new dashboard is sleeker and tucked in. There are design elements near the gear lever, which better-envelops the driver and front passenger.

The steering wheel is also different and functions like prior, but what sets the next-generation compact apart from its predecessor is the gauge cluster in the top-of-the-line Hybrid variant. Not only do you get a cluster that looks quite good, but it also displays your current mode clearly, whether you’re using the gasoline engine or the EV mode.

Instead of having its infotainment system in the dashboard, the new model now comes with a top-mounted system. It’s still a display audio unit and carries AUX, USB, and Bluetooth capabilities with it just like its predecessor.

Overall, the interior is a good refresh and, like the exterior, augments the look and feel of the previous-generation Corolla Altis with even more soft-touch materials and padding. 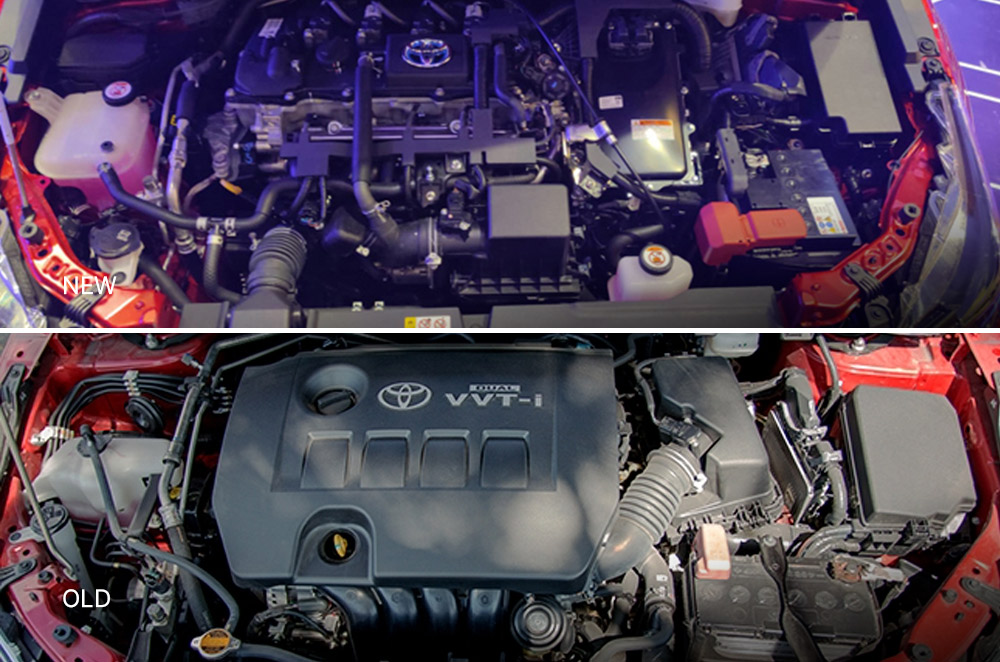 Here is the main headlining feature of the Toyota Corolla Altis. While E, G, and non-hybrid V models get the 1.6L gasoline engine, the Hybrid V variant gets a 1.8L mated to electric motors that allow it to save fuel whenever necessary, and utilize the energy stored in the batteries when needed. Oddly enough, the 1.6L and the 1.8L (combined with the electric motor) produces the same horsepower, at 121 hp. Torque is a different story for the two variants, however, coming in at 153 Nm for the 1.6L, and 207 for the 1.8L Hybrid.

The older generation Corolla Altis had two engine options as well. You do have the same 1.6L, but the older top of the line model gets the 2.0L that produces 145 hp and 187 Nm of torque. There is no longer a big displacement option for the Corolla Altis, but the Hybrid system is a good tradeoff for the right kind of buyer.

The Hybrid system uses the engine as the primary source of electricity generation. You don’t need to plug in this car because it behaves as any normal one would. Just gas and go, and let the engine charge the batteries. When at rest and going slow, the electric motor takes over when crawling and going up to speed, but for higher velocities, the gasoline engine will take over.

All of this is mated to a CVT that’ll undoubtedly boost the already-good fuel economy that is expected of a hybrid. All automatic models feature a CVT, and baser models come with a six-speed manual transmission; same as prior.