The Ford Escape was ahead of its time back in 2001 when it was first launched. With the size being similar to the crossovers of today, it was a formula for success in a time when people didn’t know what they wanted.

The small SUV is getting a remake from the blue oval. The stylish all-new Escape features the latest and greatest technology that can be fitted into a small SUV such as this. This all-new Escape brings a sleeker, sportier design with the capability to take you on just about any of your life’s adventures,
Kumar Galhotra
President, Ford North America

Elements from the Ford GT are featured into the new design of the Escape. With a front face that borrows the nose of the American supercar, the Escape sports its new facia with a bit of a smirk on its face. The trapezoidal grille is inspired from the Mustang’s design as well. A sloped roofline also contributes to the sporty motif that Ford was going with in their new crossover. Gas engine-powered models and standard hybrid models are available with all wheel drive (AWD). EcoBoost technology is also featured in this model family. Either a 2.0L turbo engine or a 1.5L turbo engine will be paired with an 8-speed automatic transmission that promises smooth and responsive shifting. The EcoBoost engine in its 2.0L size produces 250hp and 372Nm of torque. The 1.5L, which was found the previous generation Ford Focus produces very similar figures. A healthy 180hp with 240Nm of torque can be eked out of this small displacement turbo motor. One thing the 1.5L has over the bigger engine is the cylinder deactivation feature, which helps conserve fuel, ensuring a longer and more efficient drive.

The batteries are liquid cooled lithium ion cells that slot smartly below the second-row of seats, rather than occupying a significant portion of the cargo area. 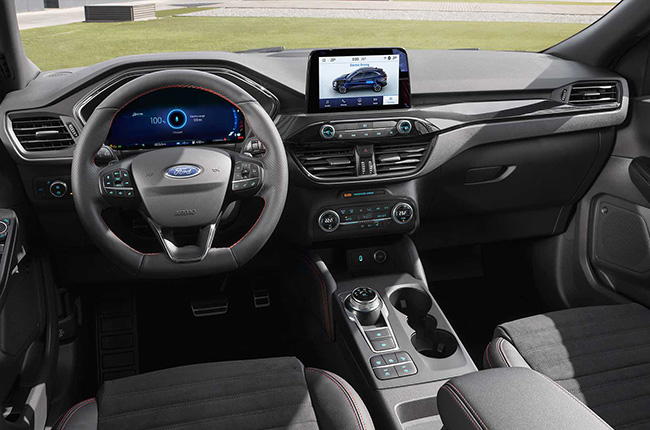 The crossover also sports new tech such as a 6-inch heads up display (HUD), which lets drivers check their speed and other information without having to look down at the gauge cluster of the car. Driver assist technologies also make their way into the crossover. Active Park Assist 2.0 is featured, as well as Evasive Steering Assist. Ford’s Co-pilot 360 system makes Adaptive Cruise Control with Stop-and-Go and Lane-Centering a possibility with these models. The Escape even features WiFi connectivity for up to 10 devices with FordPass Connect. An 8-inch touch screen that is found in SE models and above shares information with the instrument cluster of the driver. Sync 3 is also integrated and features Apple CarPlay, Android Auto, as well as Ford+Alexa and Waze. This headunit is mated to a 10-speaker Bang & Olufsen sound system.

With a feature list as long as this, the Escape has really come into its own when it comes to offering the latest and greatest for the consumer. With an updated look and a new powertrain the Escape becomes a premium option to rival many crossovers here in the Philippines, if we even get it, that is.

The car would go up against the likes of the venerable Honda CR-V and feature-for-feature, the Honda does not come close. But then again, we are comparing our local units with American units that come packed to the gills with tech. The spec sheet is drool worthy, but even taking a look at the exterior of the car can spark a bit of excitement for the blue oval’s newest crossover. It’d be nice to see this here in the Philippines.