The great Leo Tolstoy once said that “the two most powerful warriors are patience and time.” Well, if you’re among the warriors who have been patiently waiting for the Ranger Raptor, this story could probably brighten up your day (or night).

Finally, Ford Philippines officially launches the Ranger Raptor, the first of its kind, and perhaps the most sensational pickup on the face of the internet. This pumped-up truck has sprung a lot of interest since the news about it broke out last year up until its official introduction in Thailand back in February, and way beyond that. The Philippines isn’t the first country to have the coveted Ranger Raptor in the showrooms, but still, it’ll never be too late for a pickup truck that looks this cool. If it hasn't been established yet, the Ranger Raptor is the “downsized” version of the F-150 Raptor in the U.S. As such, it inherits the monster pickup’s styling, which includes the huge (and legit) Ford lettering on the grille and Raptor decal by the bed. Of course, there are bulging fender flares to complement the 33-inch BF Goodrich All-Terrain tires wrapped around the 17-inch rims. To heighten up the look, the Ranger Raptor has an array of LEDs, including the daytime running lights, fog lamps, and taillights, while the headlights are HID.

With all the aesthetic upgrades, the Ranger Raptor measures 5398mm in length, 2180mm in width, and 1873mm in height. Ground clearance is at an impressive 283mm, while the approach angle is 32.5°, ramp-over angle is 24°, and departure angle is 24°. Now, if you think you can take this pickup truck anywhere with these numbers, you probably can. And we mean, anywhere.

The bed, on the other hand, is 1560mm wide and 1743mm long. The modified rear bumper is also fitted with tow bar and two recovery hooks, complementing the 2500-kg towing capacity of the performance pickup truck. 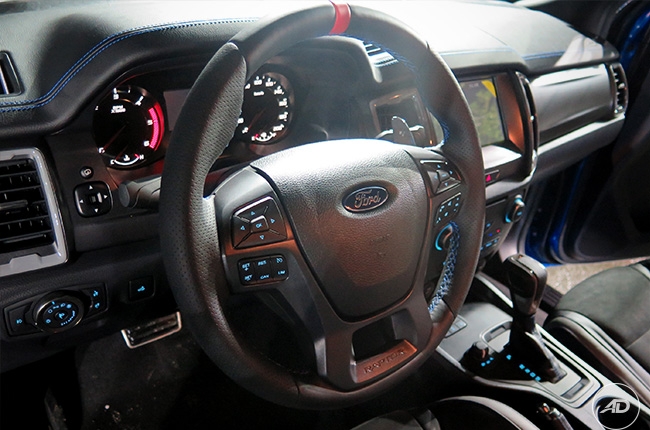 Aside from aesthetics, the Ranger Raptor is equipped with performance parts so it could excite those off-roading junkies out there. Damping is taken care of a tailor-made Fox suspension and a coil-over Watts Link rear setup, plus the brake rotors are 332-mm big. Underbody panels (including a huge bash plate) and frame-mounted bumpers are also added for protection, as well as the six-mode terrain management system, including the Baja mode from the F-150 Raptor.

Inside, the Ranger Raptor has the same plush, homey interior of the Ranger except for some accents including blue stitches, red trim on the steering wheel, magnesium paddle shifters, and a number of Raptor logos. It also has body-contoured sports seats (with electronic adjustment) and an eight-inch infotainment system that's loaded up with SYNC 3 software and navigation. Perhaps the most interesting thing about the Raptor is its entirely new four-cylinder, 2.0L diesel engine fitted with a pair of turbos that can produce 210 hp and a generous 500 Nm of torque. These numbers are sent to all four wheels via a 10-speed automatic transmission. Compared to the five-cylinder 3.2L Duratorq diesel of the outgoing Ranger, the Ranger Raptor churns out 14-hp and 30-Nm more. Now, who says small engines can’t do so much?

The Ford Ranger Raptor costs P1,898,000. Aside from the popular Blue Lightning, it's also available in a variety of colors such as Conquer Grey, Frozen White, Shadow Black, and Race Red. With all the features and machismo points that come with it, along with its attractive price point, choosing between a pickup truck and a midsize SUV couldn’t get any harder.

If you'd like to test drive the Ford Ranger Raptor yourself, you can head on to the Island Conquest in Arca South, Taguig on September 22, 2018, Saturday. Have fun!