It looks like Ford Philippines has something planned for the month of June as it could be launching a new model soon. While details about the new model are still sparse, it's anyone’s guess as to what it could be. We, however, have narrowed down the options to two possible models that could be joining the local lineup soon. The first of two possible models is the F-150. While details of what variant of the full-size pickup truck the Blue Oval might be is still sparse we have a couple of guesses. It will for sure be a double cab version of the pickup as single or even extend cab pickups are a rare sight in the country. Signs also point to the Limited trim-level of the pickup entering the country, however, it might be a slightly stripped out version of the vehicle.

While power options are still unknown here are our speculations. The F-150 could enter the local automotive market with a diesel engine. Ford already has diesel options available in the united states that are already compatible with the pickup truck. As to what engine exactly we can't say for sure as there are many variables that need to be accounted for. A more conventional and more likely option is a gasoline engine an Ecoboost motor to be precise. The F-150 could be launching in the Philippine market with a 3.5-liter Ecoboost gasoline motor. The engine is capable of producing 375hp and 672 Nm more than enough to get the truck going and more than enough to haul or tow. While its numbers are impressive with such a large displacement engine under the hood it could increase the pickup truck’s price point.  As far as transmissions are concerned the F-150 could enter the market with a 10-speed automatic similar to those seen on the Ford Ranger Raptor, and Ford Mustang.

In terms of measurements, the F-150 should be about 5,907mm in length, 2,083mm in width, and 1,954 mm in height. With those dimensions parking especially around the city might be difficult. One thing is for sure though whatever variant of the F-150 Ford brings in, it will likely be a double cab version. 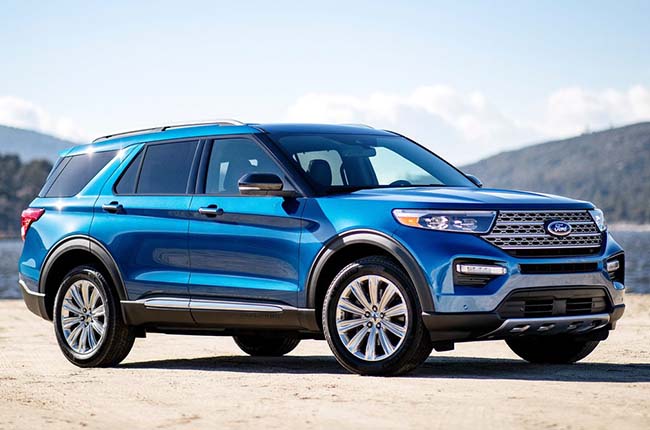 Our second guess is the newest generation of the Ford Explorer. Ford Philippines has already offered the 5th generation of the crossover with sizable discounts and promos. This could mean that the American brand is selling off its inventory for the arrival of the new model.

The sixth generation of the Ford Explorer made its debut at the 2019 North American International Auto show. The 2020 model of the vehicle now rides on a new CD6 platform and also comes with a high-performance version. The 6th generation of the vehicle shares the same design aspects as the 5th, however, it does come with a new face. The layout of the interior remains familiar and still offers a comfortable ride with power on tap.

While these are just speculations, whatever model Ford Philippines decides to bring in will surely be a hit and will surely shake up the segment it enters. We will just have to wait for the official launch of the new model coming in the later half of June 2020.

Get Notified About Ford Explorer News