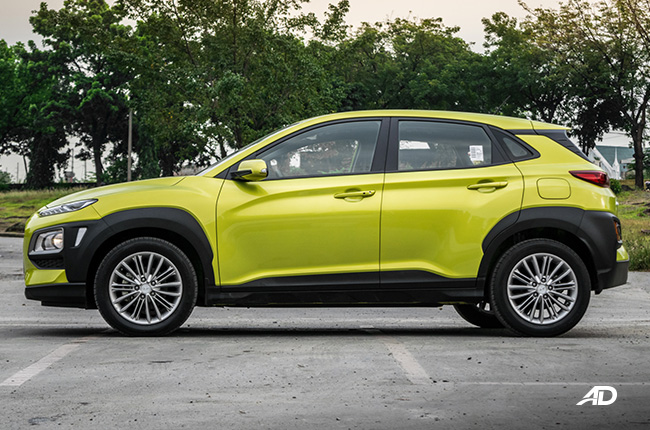 The Hyundai Kona is undeniably popular, getting so much social media engagements and reactions ever since it debuted at the 2018 Manila International Auto Show. Even at mall displays, it gathers a number of people around mainly because of its compelling looks that’s a bit different from what Filipinos have been seeing on the road.

While the Kona is head-turning and has proven its great driving dynamics in my general review, the technology it offers is questionable. Here’s a closer look into the Kona’s technology features, along with its safety equipment that comes with its price P1,118,000 price tag. No, this doesn’t mean that the Kona is stripped down to just bare essentials. It still has convenient tech features for the driver – things that actually matter, I must say.

It has speed-sending door locks to begin with, which kick in when you reach around 30 km/h. The side mirrors are also power adjustable, although folding them would be manual. The driver’s window is auto-down, as well, but pulling it up would require you to keep your finger on the lever, which isn’t a hard thing to do, really. Let me just remind you that there was a time when you have to manually roll windows up or down – something to confuse kids these days, but I digress.

The Kona has an active keyless entry where you just have to press a button on the door handles to unlock all the doors, provided that the key fob is with you. In combination with that, it also has a push-start ignition button and cruise control. Probably the biggest downside of the Kona is its non-touchscreen, monochrome infotainment system. While most cars these days, including small entry-level nameplates, invest on bigger and better head units, Hyundai Philippines decided to go basic with its entertainment system. Admittedly, though, the monochrome display somehow blends well in the minimalist cabin, and smartphone connectivity isn’t too much of a problem; it has Bluetooth and iPod connectivity. Handsfree calls are clear and can be controlled via the buttons on the steering wheel. Fast-charging USB ports are limited to front passengers, though.

As a former musician, I must say that the speakers of the Kona produce a decent sound for normal listening pleasure – decent, but won’t probably suit the taste of music connoisseurs. It lacks clarity on highs and lows, even when the EQ is toggled. But for pop music where lyrics mostly matter, it gets a thumbs up from me. Aside from its driving dynamics, the Kona somehow stands out with its safety features. It has the standard ABS with EBD, while both the driver and front passenger get seatbelt reminders; my wife is very particular with this since she’s always with me when I’m driving.

In addition, the Kona has six airbags: two in the front, two on both sides, and two curtains. You might not actually feel the effect of these things but when push comes to shove, they could actually save your life. It also has ISOFIX child seat anchors and tire pressure monitors, along with an immobilizer for security.