GAC Motor in the Philippines presents its 2018 GS4 compact crossover to the market in order to capture the attention of the crossover crazed consumer. The model has even been awarded the “Innovation for The Future” award in the American International Auto Show. So take a tour with us as we give you a quick glance of almost everything inside and outside of this award-winning crossover from the luxury manufacturer.

Right off the bat, it comes with a 1.5L turbo engine that is capable of 151 hp and 235 Nm of torque. The spritely little mill is boosted to give it more pull in when it needs it. The transmission in question is a six-speed automatic that sends all that power to the front wheels.

Highlighting the front of the car, and lighting up the road ahead of you is a set of projector halogen headlamps that give this crossover a mean glare. Coupled with LED daytime running lights and halogen fog lamps makes its front look fully loaded from the factory. It rolls on 18-inch wheels

GAC makes it a point to give its consumers the best feature set for the 21st century. Cameras populate key areas of the exterior to give drivers an all-around view for squeezing into tight parking spaces or tighter roads and alleys that this crossover might encounter in the urban jungle.

The interior comes fully clad in leather, and the power seats are a great touch for on the fly adjustments. Breathe the engine to life with its push start technology, and watch as the two-dial gauges with a color display trip computer greets you with the GAC logo. You’re in full control of the wheel because this crossover comes packed with cruise control and with audio controls for the touch screen head unit.

Speaking of the head unit, it comes with the standard fare of features one can expect from a modern car. You’ve got Bluetooth, USB, and six speakers in total to bring you some semblance of joy while stuck in traffic or on a road trip.

At P1,188,000, the crossover is more affordable than most of its rivals. It also offers a lot of premium features for a not-so price. Safe to say it gives the most value for the least amount of money spent. 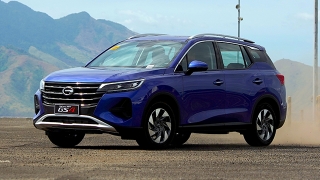 The GAC GS4 is a 5-seater compact crossover that’s looking to shake up the segment with its advanced tech features and competitive price point.